Which one to get: Lomo’Instant or Leica Sofort? If this is a question you’re currently struggling with and you still haven’t got an answer, hopefully our head to head article will help you decide. Not only do we briefly present you each camera model, we’ll also talk about their weaknesses and strong points. Additionally, several of their features will be compared to help you get a better idea about them. Read on to find out more!

Some people are more artistic than others, and the Lomo’Instant camera is something they could consider if they like photography. There are several reasons to say this, but the main one is the possibility of overexposing the same picture several times, and not just twice like with most other similar cameras, including the Sofort.

Exposing the photo several times is possible thanks to the longest aperture feature this model has, when compared to the others. Its aperture ranges between -2 (or f/32) and 2 (or f/8). Many would recommend to just overexpose just twice or three times.

If you think you’ll miss the filtering option on the digital cameras, or smartphones, this device comes with some gels to apply over the flash to give certain hues to the image. Additionally, to increase your creativity, you can purchase 3 separate lenses that will help with taking a variety of pics. The available lenses as fisheye, a 35mm-equivalent “portrait” and a macro.

The Sofort instant camera was designed to capture important fleeting moments, and this is the most affordable model sold by Leica. Its shutter speed is 1/400 second which allows you to take pictures while the object is in motion.

The inspiration for this model was the Fujifilm Mini 90. In fact the two models are nearly identical when checking out their specks. What’s more is that this is a quite intuitive camera and almost as precise as a digital one. This means that taking photos is very easy and a straightforward process.

Its best advantage is that it uses the natural light as much as it possibly can, in the auto mode. This means the flash won’t get used, unless really needed. It also has a red eye reduction function which is very useful when using the flash in combination with artificial light.

Its only let down for Leica fans, or those who want a Leica, but can’t afford the classic models, is its lens. The lens is a variation of the one used on the Fujifilm Mini 90, and not the ones Leicas are known for.

Aside from these cameras being used for instant pictures the size of a credit card, there are a few other features they have in common. For instance, they’re both compatible with the Fujifilm Instax Mini film.

Both models give the user control over the flash, with setting it on, off, or auto. They also share a special setting for indoor photography with light coming from a bulb.

Telling the machine where the subject it, in relation to the lens, is another feature the two cameras share. There are 2 options here: close at under 3 feet, and far, which is anything further than 3 feet.

Neither of these models will create the crips photos you’re hoping for. One of the factors influencing this aspect, is their size. Additionally, they’re pretty close in design to the analogue cameras, and they aren’t compatible with professional lenses able to capture all the details.

Both cameras work best with the flash deactivated on items that are near the lens, especially when there is enough light in the environment.

This feature must be the biggest difference between these 2 camera models. Some people might even think this is the main reason to buy an instant camera. In this case, be aware that only the Sofort is a point-and-shoot type of camera, while the Lomo isn’t.

The user of a Lomo’Instant has to analyze the subject and its surroundings before taking a picture. Even then, the image might not have the expected quality. This leads us to the next point, no pun intended.

When using the Leica, all you have to do is to point at the subject and press the button, as long as the camera is on. The Leica can take care of most details when taking a picture, and the results are almost always the expected ones.

Both cameras feel a bit bulky, and thus giving the impression they are a bit difficult to use. Many new users found they need to test the cameras a bit before being comfortable enough to use them properly. It takes longer to with compose photos with the Lomo, meaning this model is not for spontaneous people. Taking photos with the Sofort is an easier and faster process, making it a great choice for spontaneous folks.

Both cameras waste a few frames while you’re getting used to taking pictures with them. Despite this, it is fairly easy to figure out the controls or how to load the film on both models.

Both cameras use an optical viewfinder. There is a difference between them, though, and it stems from the fact that Lomo can use other lenses as well. These lenses reduce the accuracy of the viewfinder. The viewfinder also doesn’t work on items that are near, thus you have less accuracy when taking photos. Additionally, there are no clear frame lines like you’d see on other models.

Leica also uses an optical viewfinder and its magnification is of about 0.37x. Leica allows its users to better compose their pictures thanks to the target spot and the macro parallax compensation option. The macro can concentrate down to 11.8″.

Lomo’Instant comes with a plastic lens which is a major let down for photography lovers. This type of lens negatively impacts the quality of the pictures taken. The upside is that there are several types of Lomo’Instant and one of them has a glass lens. Additionally, the user can install other lenses on the camera, depending on how creative they are, or what their needs are.

The Sofort has only one lens, but many say it’s not the high quality one they’re expecting from Leica. This aspect also translates in a lower quality picture.

The Lomo model not only allows you to double expose your photo, but you can expose it several times, depending on the result you’re after. This is all thanks to the lens aperture that ranges between  -2 (or f/32) up to 2 (or f/8). One has to pay attention and use either more light or adjust the settings as the images are generally too dark.

With the Sofort, the user can only expose the image twice. Additionally, they have to reduce the use of flash or pay attention to how much light there is, as the images have the tendency to come out overexposed.

The speed of the shutter is usually important especially if the item you want to take a picture of is in motion. The shutter speed of the Lomo’Instant is 1/125 second while that of the Leica is 1/400 second. Needless to mention which model you should get if you’ll be moving while taking photos.

One should know beforehand that the Lomo makes a familiar and satisfying click sound when using the chunky slider of the shutter.

As far as aesthetics go, the Lomo has a nice and retro design. The model is also available in several colors and has a small mirror on the front to help you center the selfies better. However this little mirror is round, and this can be a bit misleading since the pictures are rectangular.

The Leica is available on 3 colors, but its design is a bit more modern. Its shape is almost squared, giving it an utilitarian feel. It also comes with a helpful mirror on the front for selfies. One shouldn’t ignore the red dot on the front either, as this is the Leica signature look.

So, which one do I choose?

The answer to this question is pretty easy. If money isn’t an issue and you just want a camera that allows you to just point at an object and take a picture, then Leica is for you. With this camera your pictures will look pretty standard but the result will also be rather constant once you find the settings you like the best.

If you want more creativity, and you have a budget in mind, the Lomo’Instant might be just what you’re looking for. Keep in mind that the photos taken with this model will not be as good as with the Leica.

Fujifilm Instax 210 Film - What You Need To Know 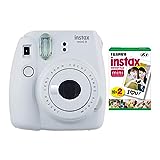